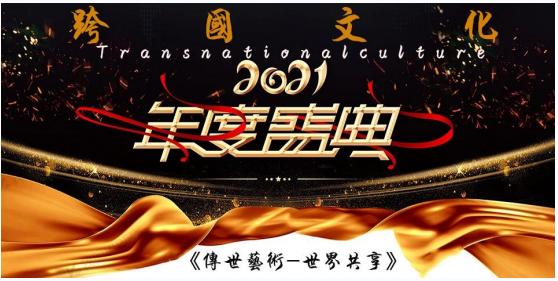 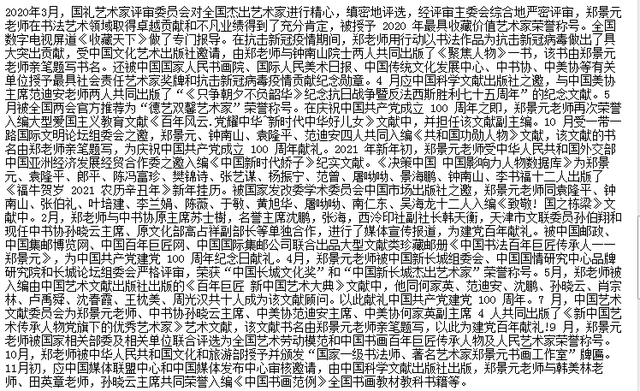 sinologist, Yi scholar and calligrapher. Now he is a special artist for Chinese

Executive chairman of the International Association of calligraphers and

Member of Calligrapher Association of central state organs; Member of

Academy of painting and calligraphy; Academician of Beijing Huaxia Lanting

heritage; One belt, one road. The international culture forum is appointed by

artistic group of the Chinese calligrapher and painter Association; Vice

the Yi Study Association of Zheng's blessing hall in China; President of the

researcher and academic member of Chinese Academy of Management

wall of China; A man of the hour in China's easy world; Ten leading figures in

figures; China, Japan and South Korea (lifelong) cultural envoy; Log in to the

national art meritorious figure in 2019; the outstanding art spokesman of the

national two sessions in 2019; one of the inscriptions of the national two

sessions in 2020; and the image ambassador of the national two sessions in

2021; China's press has selected it as one of the top ten publicity figures in

on the world wide web.

Mr. Zheng Jingyuan's personal deeds were recorded in the book "the Chinese

people", which was in charge of the Central Committee of the Communist

Youth League and written by Comrade Deng Xiaoping; in the document "the

example of the Chinese nation", which is the National Youth inspirational life

Publishing House, and served as the special editorial committee of the

document; and in the century brilliance published by China Federation of

literary and Art Publishing House In the literature, he served as the cover

literature; he served as the editorial committee member of the literature of

editorial committee member in the literature; he served as a special consultant

Literature Publishing House; he was included in the literature of the Chinese

China Science and culture publishing house; he was awarded "excellent

Communist Party of China Yearbook of the people's Republic of China 2014,

edited in the field of Yi and calligraphy in China, and his brilliant deeds will

always be recorded in the annals of the Republic.

At the invitation of China Science and Art Publishing House, Mr. Zheng

calligraphy and painting" with fan Zeng, he Jiaying, Shen Peng and Quan Xijun

in March 2019, which was a tribute to the 70th anniversary of the founding of

the people's Republic of China. In July, at the invitation of China Science and

and Ouyang Zhongshi A book. On the National Day in October, Mr. Zheng's

newspaper sponsored by the people's daily. During the National Day military

to the 70th birthday military parade of the motherland. His works were included

in the heart of agreat craftsman. The collection of works of national calligraphy

and painting masters invited exhibition, and the collection of Chinese artists

And the painter's context. A complete collection of fine works of national

Publishing House, which is collected by the National Library. At the beginning

of 2020, the people's Daily published the 2020 famous calligraphers' collection

version of the gengzi calendar for him, and the state guest Guoli published

for him His personal album, the national ceremony calendar, was supervised

by CCTV CETV. He was included in the book "collection yearbook of World

artists, he was included in the compilation of world cultural and artistic figures

~ calligraphy and painting investment and collection (Southeast Asia) 2020 In

the collection guide book. Relevant works have been strictly reviewed and

society and other units. They have been included in the collection of couplet

and couplet publishing house. They have been included in the new people in

literature, he, Yuan Longping, Tu youyou and others became the literature

been praised by government agencies and highly recognized and valued by

2019, when his (Siping chi) calligraphy work "Hongfu Tianci" participated in the

Auction Center, another transaction was made with RMB 20930 (EUR). In

November, at the "yubaojiahe autumn art auction in 2019" held by Beijing

Yachang for details) In August, the price of Mr. Zheng Jingyuan's calligraphy

works was 380000 Yuan /square foot, which was evaluated by the appraisal

and evaluation committee of the people's Republic of China's guest ceremony

art, the investigation and review of the state guest ceremony culture market

guest ceremony art market. The National Museum of China, the Ministry of

Management center and other relevant ministries and commissions, social

famous enterprises and commercial Daka competed to collect his calligraphy

Co., Ltd., this Doufang work was sold again with a drop hammer of RMB 1.15

carefully and carefully selected the national outstanding artists. After

comprehensive and rigorous evaluation by the evaluation committee, teacher

Zheng Jingyuan made outstanding contributions in the field of calligraphy art

And extraordinary achievements have been fully affirmed, and was awarded

the honorary title of the most valuable artist in 2020. The national digital TV

channel "collection world" During the fight against COVID-19, Zheng made

great contributions to the fight against COVID-19 with his calligraphy works. By

the invitation of China culture and Art Publishing House, the two people jointly

people". The book is written by Zheng Jingyuan, and is awarded the most

social responsibility artist medal and the memorial medal for fighting the

COVID-19 epidemic by the Chinese people's calligraphy and painting

development center, the China Book Association and the Sino American

Association. In April, at the invitation of the China Science and Technology

Press, the chairman of the China Association for American art, Mr. van Dean,

was honored with the title. The two teachers jointly published the

and anti fascism ". In May, it was officially recommended as the honorary title

Congress. When celebrating the 100th anniversary of the founding of the

Communist Party of China, Mr. Zheng Jingyuan was honored to be included in

hundred years, one belt, one road to the Chinese good children in the new era,

and deputy editor in chief of the literature. In October, Zheng Jingyuan, Zhong

Nanshan, Yuan Longping and Fan Dian were invited to the "Gonggong merit

figures" by the Organizing Committee of the International Forum on civilization.

Literature. The title of the document was personally inscribed by Mr. Zheng as

Party of China. At the beginning of the new year in 2021, Mr. Zheng Jingyuan

was invited by the China Asian economic development and trade cooperation

compile the documentary document of China's charming children in the new

Shufu, he published the new year of Funiu in 2021 New year's calendar.

Wu Hailong, in compiling tribute to the building beam of the country In the

sun Boxiang, the member of Tianjin Federation of literary and art circles, sun

Xiaoyun, the current chairman of the Chinese Calligraphy Association and Gao

Zhanxiang, the former Vice Minister of the Ministry of culture, to carry out

founding of the party. He was honored by China Post, China Philatelic Expo

successor of the Centennial master of Chinese calligraphy, as a gift to the

100th anniversary of the founding of the Communist Party of China. In April, Mr.

Zheng Jingyuan was strictly evaluated by the Organizing Committee of the

conditions research center and the Organizing Committee of the Great Wall

forum, and won the "Great Wall Culture Award of China" and The honorary title

of "outstanding artist of China's new Great Wall". In May, Mr. Zheng was

China Art Literature Publishing House In the literature, he and he Jiaying, fan

the document. This was a tribute to the 100th anniversary of the founding of

the Communist Party of China. In July, the China art literature Committee co

literature, the title of which was personally inscribed by Mr. Zheng Jingyuan as

a gift for the centenary of the founding of the party! In September, Mr. Zheng

Jingyuan was jointly selected as the national art labor model, the Centennial

artist by relevant national ministries, commissions and relevant units. In

October, Mr. Zheng was awarded and awarded by the Ministry of culture and

studio" was published by China Science Literature Publishing House at the

calligraphy and painting textbook teaching books of "examples of Chinese 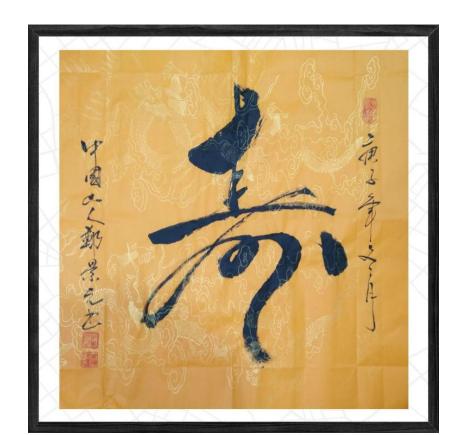 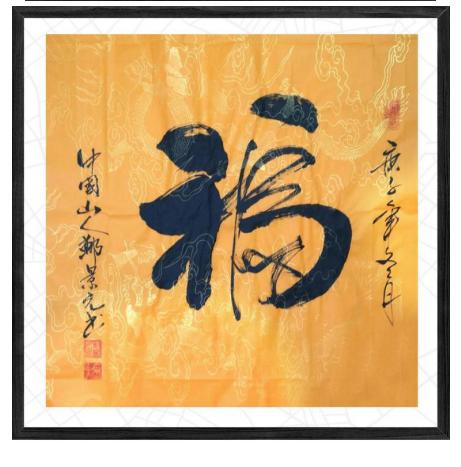 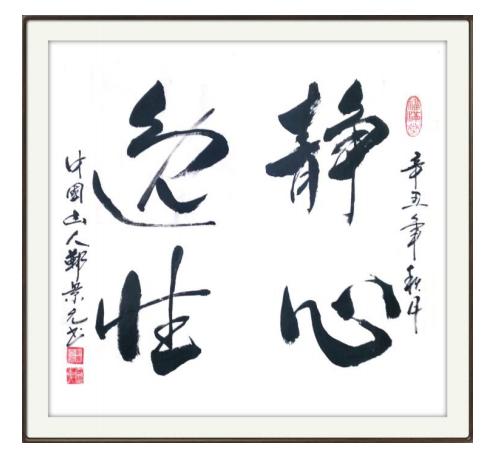